On my three-day digital leadership courses, one of the first questions I get asked about Blockchain is, “what is it?”

In this article, I’m going to introduce you to the concept of Blockchain, and why it’s becoming increasingly important to thought leadership.

Blockchain is an ingenious use of technology which was originally devised for Bitcoin (the digital currency), allowing digital information to be distributed but not copied.

At the core of blockchain is the idea of the traditional ledger, recording transactions; whether of money goods or secure data. But unlike a written ledger, or even a database held on a server, blockchain’s design makes it virtually impossible to add, remove or change data without this being detected by other users.

One of the most important aspects of Blockchain is its high level of security. It is incorruptible, and provides a digital record of not just financial transactions, but of virtually anything of value. It provides time-stamped data managed by clusters of computers not owned or managed by any one single entity – one of the reasons it is so secure. Each data block is bound to the others using secure cryptographic principles, forming a chain. Hence, blockchain.

Let’s say ‘A’ starts of by creating a block. This block is verified by thousands (or even millions) of computers (known as ‘nodes’), before being added to the chain and stored across the internet. This creates a unique record with its own history. Information on the blockchain database isn’t stored in any single location – no single, centralised version means nothing for a hacker to access and corrupt. Attempting to falsify or replicate it would require doing the same millions of times, which is virtually impossible. 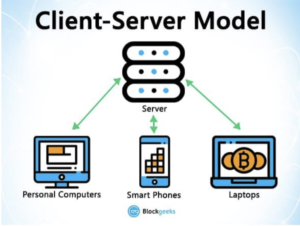 In any transaction, you send information to a server, which then responds with the relevant reply. The system works but has inherent weaknesses, namely a single point of vulnerability to hacking, corruption or failure, and downtime during upgrades (or recovery).

In blockchain’s decentralised system, there is no single owner of information – it’s shared across, and owned by, the network. In this example from Blockgeeks, Alice is able to transfer money directly to Bob (using Bitcoin) without having to go via a bank. 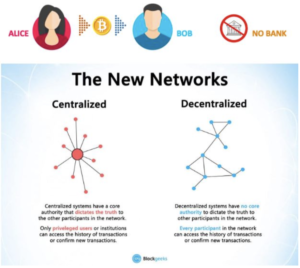 Other aspects that make this technology particularly attractive are:

Whilst blockchain is inherently secure, it is also transparent, providing a simple way to pass information from one party to another. Simultaneously hosted by millions of computers, the data is accessible via mining to anyone on the internet.

What are the applications for Blockchain?

The second question I get asked is, “how could blockchain be applied in my business?”

Whilst it’s a relatively new technology, blockchain is already being put to good use and the chances are you’ve already experienced it in action. From airline tickets to AI applications, blockchain is involved. Indeed, it’s estimated by the World Economic Forum that by 2025, 10% of global GDP will be stored on blockchain. That’s a massive shift, and smart digital leaders are preparing themselves (if they’re not already using it) to adapt and adopt. Here, I’ve picked out a few of interest, do demonstrate the wide variety of potential applications:

In Switzerland, blockchain technology is being developed to allow residents to register their ID’s, enabling participation in online voting.

The Dutch government has been working on a system for vetting passengers travelling between Amsterdam and London by Eurostar. Currently, passengers between the two countries have border control checks at several border points. The proposed solution would allow data recorded in the Netherlands to be verified by UK agencies, and blockchain’s security would provide evidence that data is accurate and untampered with.

Keeping patient records on centralised servers on a single site presents a prime target for hackers – as evidenced by the ransomware attack on the UK’s NHS in 2017. Even with security issues taken care of, the NHS (and it’s not alone) operates dozens of different record-keeping systems in its various hospitals, clinics and GP surgeries, which aren’t linked and don’t operate together, so that patient records are scattered around – inevitably resulting in frustrating breakdowns in communication, and in some cases, life-threatening errors. A blockchain system can store data so that is it immediately accessible regardless of hospital or region.

It’s reported that Google is working on its own proprietary blockchain to support its cloud-based business in relation to cloud services for enterprise, with a white label version also in the pipeline.

Blockchain technology removes the need for middlemen. The music industry has long been beset by the struggles of musicians to get properly paid for their creative efforts, and new blockchain projects are springing up which put music creators back in control.

Perhaps one of the most obvious examples of where blockchain technology comes into its own is in supply chain management, where goods are passed through numerous hands on their way from producer to end-user. Blockchain enables goods to be tracked all the way through their journey, helping to make stock management more efficient, and in the case of food products, ensuring it has been transported in a way that guarantees safety for the consumer.

The world’s best known diamond company, De Beers, has designed its own blockchain to create and maintain a digital record for every diamond they register on it. Rather like a diamond, each record is ‘forever’, helping to mitigate the risk of costly stones being swapped for less valuable ones somewhere down the line, as well as recording each stone’s country of origin – vital to counteract concerns about unethical diamond-mining practices; protecting people as well as the company’s reputation.

With sustainability hitting the headlines on an almost daily basis, blockchain provides ways to support sustainable fishing and tackle illegal fishing practices. Using distributed ledger technology, it provides proof of where fish were caught, processes and sold, allowing inspectors to see whether a consignment has originated from countries bound by economic sanctions.

The value of an artistic work is often entirely dependent on its provenance and authenticity, and the art world is plagued by clever forgeries and cons. Whilst blockchain can’t itself tell us whether a painting is genuine or fake, it can prove the previous owners of a piece. And in an example of how this technology makes objects easily tradeable anywhere in the world, it makes it possible to buy and own a valuable object without needed to transfer it from secure storage.

Despite some headlining issues, the sharing economy, exemplified by Uber and Airbnb, is flourishing. However, users rely on these interface platforms. Open source software like OpenBazaar uses blockchain to create a peer-to-peer eBay allowing users to buy and sell using cryptocurrency. It’s interesting to note that, where there is no single point of third-party control, reputation (ie your brand) will play an even larger part in building customer relationships.

And the third question is usually, “Do I really need to introduce blockchain in my business?”

This flowchart helps to clarify this for you. 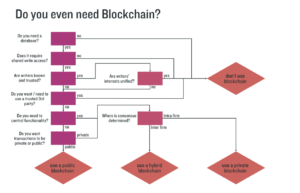 If the answer is, don’t use blockchain, so far so simple.

A public blockchain is at it sounds Anyone can join the blockchain, as long as they have a ‘wallet’ that enables them to receive, send and store data. The most commonly known example of this is Bitcoin.

A hybrid blockchain is, as its name suggests, a combination of the two, which benefits from the decentralisation of the public blockchain combined with the permissions of the private blockchain. Different participants can use difference parts of the chain, or with varying permissions.

In this introduction to blockchain, I’ve given you the outline of this exciting technology. Its applications are potentially limitless, and any business concerned with digital transformation and future sustainability should be looking at opportunities to leverage its power in the way that business is conducted. 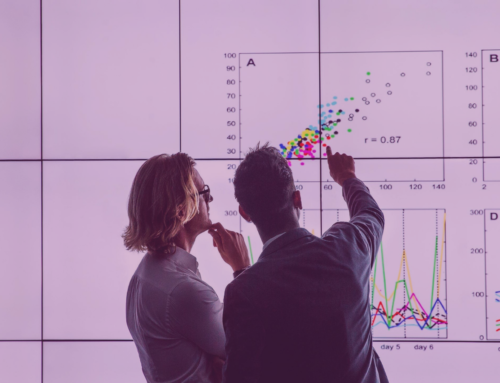 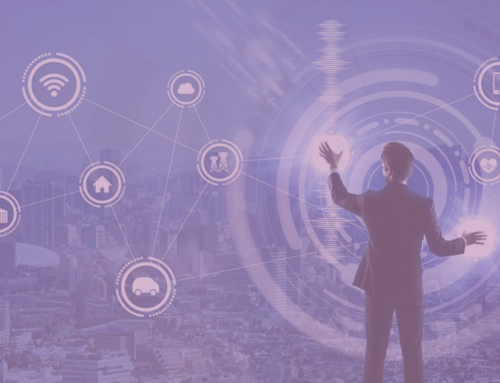 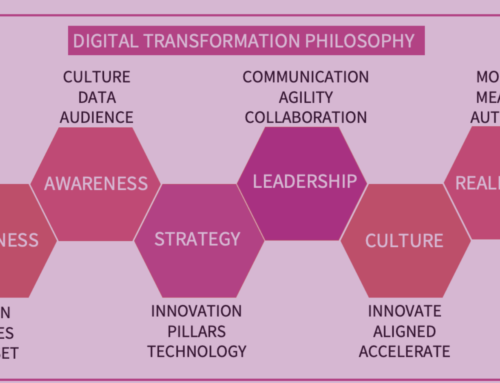 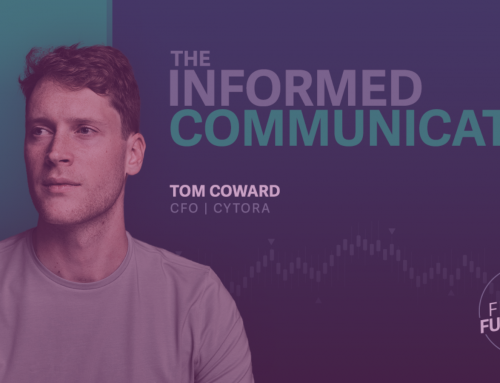 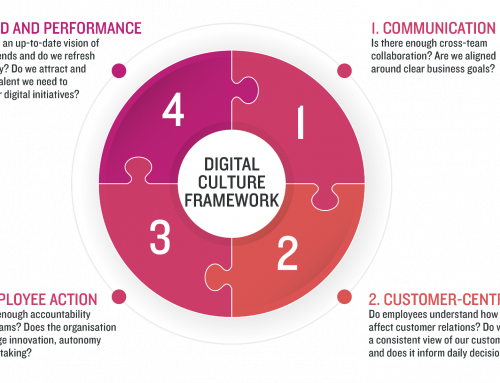 Employee Experience Platforms – The Intranet For The Remote-Working Age